In Geneva this morning, Doctors Without Borders (MSF) demanded a formal, independent investigation into the U.S. airstrike on its hospital in Kunduz. The group’s international president, Dr. Joanne Liu (pictured above, center), specified that the inquiry should be convened pursuant to war crime-investigating procedures established by the Geneva Conventions and conducted by The International Humanitarian Fact-Finding Commission. “Even war has rules,” Liu said. “This was just not an attack on our hospital. It was an attack on the Geneva Conventions. This cannot be tolerated.”

Liu emphasized that the need for an “independent, impartial” investigation is now particularly compelling given what she called “the inconsistency in the U.S. and Afghan accounts of what happened over the recent days.” On Monday, we documented the multiple conflicting accounts offered in the first three days by the U.S. military and its media allies, but the story continued to change even further after that. As The Guardian’s headline yesterday noted, the U.S. admission that its own personnel called in the airstrike — not Afghan forces as it claimed the day before — meant that “U.S. alters story for fourth time in four days.” All of this led Liu to state the obvious today: “We cannot rely on internal military investigations by the U.S., NATO and Afghan forces.”

An independent, impartial investigation into what happened here should be something everyone can immediately agree is necessary. But at its daily press briefing on Monday, the U.S. State Department, through its spokesperson Mark Toner, insisted that no such independent investigation was needed on the ground that the U.S. government is already investigating itself and everyone knows how trustworthy and reliable this process is:

QUESTION: The — so MSF is calling for an independent investigation of this incident by a neutral international body. Is that something the administration would support?

I would say — and I know the White House spoke about this earlier — we have reached out to some of the leadership in Médecins Sans Frontières to express our condolences over this tragic incident. But as to whether there needs to be an independent fourth investigation, we’re satisfied, I think, at this point that enough investigations are underway that we’ll get to the truth.

QUESTION: You don’t think that with the U.S., which is — which has an interest in how this investigation proceeds and what the outcome is, and being involved in all three investigations somehow affects the legitimacy of it?

MR TONER: I mean, frankly, I think we’ve proven over time that we can investigate incidents like these — like this, and as I said, hold anyone accountable who needs to be held accountable, and do it in such a way that’s transparent and, I think, credible.

QUESTION: Just along those lines —

QUESTION: — MSF has said that this is a clear presumption of a war crime that’s been committed here. Some have suggested that the ICC take it up. Is it a safe bet that the U.S. would vote against/veto any attempt in the Security Council to bring this incident for — up for an ICC investigation?

MR TONER: I don’t want to answer a hypothetical. On the war crime question itself, we’re just not there yet, and I don’t want to prejudge any outcome of any investigation.

QUESTION: What do you mean, “We’re just not there yet”?

MR TONER: I mean we’re conducting investigations, we’re looking at this very closely, and we’re going to, as multiple folks have said including the president over the weekend — that we’re going to hold those accountable and it’s going to be a credible investigation.

QUESTION: Does that mean —

QUESTION: So it’s conceivable to you that this could have been a war crime?

MR TONER: I said we’re not — we’re letting the investigations run their course.

QUESTION: Well, regardless of whether or not you —

MR TONER: Sure, go ahead. Sorry.

QUESTION: Is it not — I mean, it’s always been assumed, I think — and I just want to know if this assumption is still safe — that the U.S. would oppose an attempt to refer an incident involving U.S. troops to the International Criminal Court.

QUESTION: I mean, as it’s — as it was being formed, you guys ran around signing these Article 98 —

Can anyone justify that? So predictably, American journalists haveannounced without even waiting for any investigation that this was all aterrible accident, nothing intentional about it. Those U.S.-defending journalists should be the angriest about their government’s refusal to allow an independent, impartial investigation since that would be the most effective path for exonerating them and proving their innocent, noble intentions.

Many Americans, and especially a large percentage of the nation’s journalists, need no investigation to know that this was nothing more than a terrible, tragic mistake. They believe that Americans, and especially their military, are so inherently good and noble and well-intentioned that none would ever knowingly damage a hospital. John McCain expressed this common American view and the primary excuse now accompanying it — stuff happens — on NPR this morning: 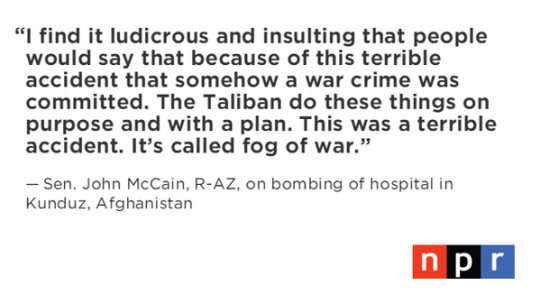 But they are not apparently so certain that they desire an independent, impartial investigation into what actually happened here. The facially ludicrous announcement by the State Department that the Pentagon will investigate itself produced almost no domestic outrage. A religious-like belief in American exceptionalism and tribal superiority is potent indeed, and easily overrides evidence or facts. It blissfully renders the need for investigations obsolete. In their minds, knowing that it was Americans who did this suffices to know what happened, at least on the level of motive: It could not possibly be the case that there was any intentionality here at all. As McCain said, it’s only the Bad People — not Americans — who do such things deliberately.

But those who already know that this was all a terrible mistake, that no U.S. personnel would ever purposely call for a strike on a hospital even if they thought there were Taliban inside, should be the ones most eager for the most credible investigation possible: namely, the one under the Geneva Conventions, which MSF this morning demanded, by the tribunal created exactly for such atrocities.

Glenn Greenwald is a journalist, constitutional lawyer, and author of four New York Times best-selling books on politics and law. His most recent book, No Place to Hide, is about the U.S. surveillance state and his experiences reporting on the Snowden documents around the world. Prior to his collaboration with Pierre Omidyar, Glenn’s column was featured at The Guardian and Salon. He was the debut winner, along with Amy Goodman, of the Park Center I.F. Stone Award for Independent Journalism in 2008, and also received the 2010 Online Journalism Award for his investigative work on the abusive detention conditions of Chelsea Manning. For his 2013 NSA reporting, he received the George Polk award for National Security Reporting; the Gannett Foundation award for investigative journalism and the Gannett Foundation watchdog journalism award; the Esso Premio for Excellence in Investigative Reporting in Brazil (he was the first non-Brazilian to win), and the Electronic Frontier Foundation’s Pioneer Award. Along with Laura Poitras, Foreign Policy magazine named him one of the top 100 Global Thinkers for 2013. The NSA reporting he led for The Guardian was awarded the 2014 Pulitzer Prize for public service.