The British government’s latest initiative, which could ban local councils, public bodies and student unions across England from boycotting or disinvesting in unethical companies, flies in the face of its rhetoric in support for devolution and local decision-making.

Much of the government’s rhetoric has focused on the international ‘Boycott, Disinvestment and Sanctions’ (BDS) campaign against Israel, but the supporting policy document, published yesterday, also makes clear that it believes that “outside where formal legal sanctions, embargoes and restrictions have been put in place by the UK Government,” all boycotts are ‘inappropriate’.

Worse, at the very same time it is trying to curb council procurement policies the government is also consulting on a complementary policy that could also ban local authorities in England and Wales from pursuing investment policies that exclude arms companies and others that are linked to human rights abuses.

In a bid to justify the moves, Hancock spoke of his desire to challenge what he sees as “divisive townhall boycotts.” He then stressed that the measures should be viewed as one package to reform local government, saying “The new guidance on procurement combined with changes we are making to how pension pots can be invested will help prevent damaging and counter-productive local foreign policies undermining our national security.”

Incredibly, Hancock seems to suggest that councils choosing to boycott or disinvest from companies they regard as unethical aren’t being merely divisive but dangerous.

The plan was first trailed last October, on the opening day of the Conservative Party conference, when the Communities Secretary, Greg Clark, announced the measures as part of a plan to stop councils from supporting “politically motivated boycotts and divestment campaigns.”

Clark asserted that “divisive policies undermine good community relations, and harm the economic security of families by pushing up council tax.” He was backed by Hancock, who added “We will take steps to stop such outdated policies being pursued through procurement and pension policies.”

The policy was explained via a ridiculous press release that, among other things, denounced Campaign Against Arms Trade. It accused us of being ‘hard left’ and criticised us for urging councils to end their investments in arms companies, such as BAE Systems, that fuel and profit from conflict around the world.

Under the ridiculous Cold War era sub-heading Dangerous Consequences of Hard Left policies, we were told that “The campaign against British defence companies risks harming Britain’s export trade.” In other words, central government believes that arms company profits are of more importance than local democracy.

Of course, local authority boycott and disinvestment campaigns are nothing new. From the 1960s onwards, over 100 local authorities decided to take the step of banning South African goods from their offices and schools. In 1981 Strathclyde Council was the first to go one step further. It announced an end to pension fund investments in any companies with South African subsidiaries, and also banned South African sports teams from its playing fields. 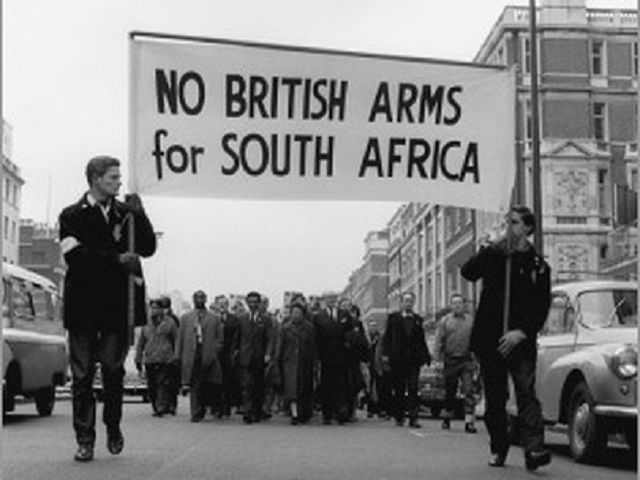 The movement grew, and Strathclyde was soon joined by Cambridge, Newcastle, Glasgow and most inner-London boroughs. One estimate suggests that by 1985 two thirds of the population lived in local authorities that supported the anti-Apartheid movement.

The Conservative party may have had a very dubious and inglorious record when it came to apartheid, with Thatcher famously branding Nelson Mandela a “terrorist“. However, it seems fair to assume that Hancock wouldn’t argue that any of these councils were “out of touch” with the public or on the wrong side of history? Presumably he wouldn’t pretend that these policies resulted in higher taxes or social breakdown?

So where does it all end? At present the rhetoric is limited to baseless scaremongering about the effect of anti-Israel boycotts or disinvestment in arms companies, but in the long run these proposals could impact on almost all campaign groups.

If we accept the premise that Whitehall should have the right to ban councils from setting their own investment and procurement policies, then the same regulations could easily be deployed against environmental groups calling for a shift away from fossil fuels or health charities calling for an end to investment in tobacco.

It’s important to note that the question here is not over what people think of Israeli foreign policy or the arms trade per se. At heart, this is a question about democracy: Where should decisions like this be made, and who should be making them?

If Whitehall is allowed to remove these powers from local authorities then this will only reduce the opportunities for local people and campaign groups to lobby for and create change on their own doorstep.