Minutes of diplomatic meetings reveal unpleasant truths about the war against Syria.

The Lebanese daily newspaper Al Akhbar published a detailed article on US plans for Syria on February 22, 2018. The original text titled “Washington to its Allies: Let’s Split Syria” comes from journalists Mohammad Ballout and Walid Sharara. The text is based on a diplomatic protocol that Al Akhbar was leaked and in the plans of the United States, Britain, France and their allies of Syria are represented. The protocol not only exposes the breach of international law and the instrumentalization of the UN and the Geneva Syria talks, but also that the policy of the US and its allies in Syria is directed against Russia and Iran. The Rubicon will publish this article in an exclusive translation in a timely manner. Here is a preliminary report.

A confidential diplomatic protocol by Benjamin Norman, a diplomat at the British Embassy in Washington (1), responsible for Middle Eastern policy, was made public in an article by the Lebanese daily newspaper Al Akhbar (2).

The content is so explosive that I tried to contact the journalist through friends who did the Al Akhbar research to verify the original document. However, this fears legal consequences. Since I believe the source to be reliable, here are the revelations about the policies of the Western powers in Syria, as they are revealed in the document.

The meeting took place on January 11, 2018 in Washington. The participants were Hugh Cleary, head of the British Department of the Middle East, Jérôme Bonnafont, director of ANMO (Afrique du Nord et Moyen-Orient) and North Africa and the Middle East of the French Government, David Satterfield, Deputy Secretary of State the USA for the Middle East, as well as the Jordanian Nawaf Tell and the Saudi Jamal al-Aqeel.

The diplomatic message reveals the strategy of these states with regard to Syria:

The division of the country, the sabotage of the peace process of Sochi, the trick of Turkey or urging them into a war of aggression against Syria and the influence on the UN Special Rapporteur Staffan de Mistura.

The document contains an unofficial system in anticipation of the second meeting of the “small group”, which took place on 23 January 2018 Paris and mainly the theme “Chemical Weapons” and “instructions” for Staffan de Mistura were dedicated. Which casts a special light on Macron’s comments on the Red Line in the case of “poison gas use” by the Syrian government (3).

The article reports that on January 11, David Satterfield opened the meeting with the announcement that the second meeting was scheduled for January 23 in Paris. Satterfield confirmed that President Trump has decided to maintain a large military presence in Syria, even after defeating ISIS / Daesh. A communication that contradicts Trump’s remarks on 24 February 2018 (4), which should not be surprising.

The cost of permanent occupation of Syria is estimated at $ 4 billion, according to the report. On the one hand, the US presence is supposed to prevent the resurgence of Daesh, but more importantly, it should prevent “Iranians settling permanently and finding themselves in the search for a political solution.” Satterfield insisted that the first “small group” meeting should also provide “material and political support to Staffan de Mistura” in order to “consolidate the Geneva process”.

The consolidation of the Geneva Process

The report states that the United States believes that it will no longer be able to attend meetings in Astana, having already severely curtailed its participation in the past, with the aim of increasing its involvement in the Geneva negotiations.

The participants of the round then realized that “Geneva had failed, despite the efforts of Staffan de Mistura”. They attached particular importance to bringing a ceasefire into the Geneva negotiations: “In truth, we do not have the means to prevent the regime (5) from dissolving the remaining pockets of opposition in Idlib and East Ghouta.”

The group was evidently concerned with sustaining the territories occupied by terrorists and the agonies of the civilian population there and thus with the pressure “on the regime” as long as possible.

The US, meanwhile, would not support the requirement of a transitional government, as foreseen by UN Resolution 2254, the rapporteur maintains. It is then added in the text of the report that it would be helpful for the opposition to stop constantly insisting on this requirement of a transitional government, presumably one without President Bashar al Assad.

It was also agreed that “the opposition must be more flexible and stop playing ‘the specter of an interim government,” as the Americans said, but without the ultimate goal of smashing Syria and unleashing Bashar al-Assad to lose sight of.

According to the article, the French representative Jérome Bonnafont brought the issue of a possible involvement of Bashar al-Assad in future elections into play. The article notes that David Satterfield answered that “the goal is to create conditions and institutions that will prevent Assad from winning elections.”

Satterfield added that there would be “no reasonable reason” to exclude Assad as a candidate. Under these conditions, it would essentially be a matter of Russia’s possible resistance to “encourage the regime to allow a new constitution, free elections under the control of the United Nations, and the creation of an environment conducive to these two processes.”

Satterfield wanted to get the Russians to drop Assad “through Security Council meetings and a broad public relations campaign,” assuming that the upcoming presidential elections in Russia would weaken Russia’s previous position.

The sabotage and instrumentalization of Sochi

One of the conclusions of the first meeting of the “small group” was clear: “to revive Geneva so that Sochi becomes irrelevant”. France demanded more “transparency about the position of Russia”. But it would not have been the time to position themselves head-on against Sochi, as there is a significant part of Syrian civil society, from which “the best contributions to Geneva could be made to restart and revive the Geneva format”. ,

According to the report, the Saudi participant warned of the risk of further splitting the opposition into different groups and called for help to ensure cohesion. Satterfield responded that opposition representatives “should be more concerned with finding a political solution rather than high salaries and long stays in pleasant hotels.” France supported this remark by emphasizing the necessary “communication”.

In this regard, according to the article, the Commentary is found in the British Protocol: “Unfortunately, the Fifth Republic does not intend to finance these efforts.” Britain recalled that “the opposition’s communication was financed primarily by Great Britain”.

The report further stated that David Satterfield stated that Turkey’s opposition to the participation of the Kurdish People’s Protection Units (YPG) prevented them from participating in Geneva. While he understood Ankara’s position, he emphasized that “we can not ignore a group that controlled a third of Syria (sic) and did most of the fight against Daesh (sic).”

He stated that the Americans would seek to establish a multi-ethnic leadership in northeastern Syria to undermine the hegemony of the YPG. ” On the other hand, it would be necessary to involve the SDF (Syrian Democratic Forces, mainly Kurds under US control) in the process in Geneva.

The article then complements the author’s commentary: “I have heard that the United States wants to send William (Bill) Roebuck, her former ambassador to Bahrain, as a special envoy of the SDF. It is necessary to remember that it became clear from our separate discussions, for example with Fiona Hill, that relations between the United States and Turkey are already very bad and will hardly improve.

As a result, Americans are not in the best position to tackle the huge task with the SDF and Ankara alone. “So a former US ambassador will be ambassador of the Kurds in Syria. More must probably not be said on the subject of “proxy war”.

The goal would then have been clearly defined: “to persuade Staffan de Mistura to accept in Geneva a tripartite structure consisting of the opposition, Assad and the SDF”.
In addition, the US Secretary of State pointed out that before the next meeting on January 23, Staffan de Mistura would be sent an unofficial paper entitled “Reviving Syria’s Political Development in Geneva” in Paris to play off the Russians.

This document contained “a political roadmap, the elements of constitutional reform, the structure of UN Electoral Surveillance and guidelines for the establishment of a peaceful environment”. In other words, the US wants to shape the social changes in Syria according to their wishes under the guise of UN proposals.

The author of the report concludes: “At the moment we have to limit this group only to the USA, Great Britain, France, Saudi Arabia and Jordan. The next invitees are Egypt and Germany (for whom we made ourselves strong) “. Turkey should also join the group, but the discussion with the country could, according to the report, be poisoned by the Kurdish issue, making it more difficult to neutralize Astana. Therefore, it would not be the moment to integrate the three countries.

The concluding comments in the diplomatic report speak volumes about the future of Western strategy in Syria. The three main conclusions underline “a real confirmation of the US leadership behind the scenes …”. The second aspect, according to the article, is “to maintain the pressure on Russia, even though Moscow can not be persuaded to drop the regime, as we had hoped”. In this regard, “we must continue as we already do, to denounce the terrible humanitarian situation, as well as the complicity of Russia in the bombing of civilian targets.”

The document clearly shows the Western strategy in Syria. The point is to sabotage the Sochi peace process and bring two new wars into the Syrian crisis: Turkey’s war against the Kurds, which has already begun, and that of the Israelis against Iran and the Lebanese Hezbollah, which is about to erupt seems to stand.

Its purpose is obviously to arm the Kurds to control oil reserves in eastern Syria to influence the political and economic development of the country. The exciting question will be whether the Kurds will allow themselves to be instrumentalized in the long run by the USA in this form. 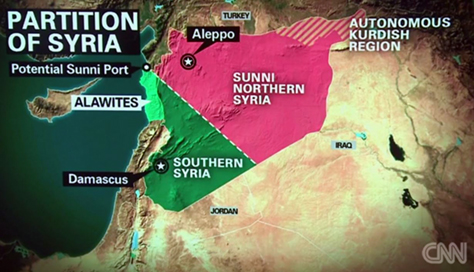