Over the past two years, enlightening information has been revealed that thoroughly and unequivocally debunks the “humanitarianism” of the White Helmets in Syria, sometimes referred to as the Syrian Civil Defense.

Since they were founded in 2013, much of Western media has sought to elevate the White Helmets as the “bravest” and most heroic of Syrians. They have been the subject of a Netflix documentary, which won an Oscar, and has consistently been plastered across TV screens in surprisingly well-produced videos showing them removing children from rubble in war-torn areas claimed by Syria’s “rebels.”

However, missing from this unambiguously positive coverage has been the group’s ties to terrorist groups like al-Qaeda, their doctoring of footage, their role in executing civilians and their use of children – both dead and alive – as props for producing pro-intervention propaganda. Also absent is how the White Helmets have received over $123 million from 2013 to 2016 from the U.S. and UK governments, as well as Western NGOs and Gulf state monarchies.

While numerous articles have been devoted to dispelling the propaganda that surrounds the group and detailing their shady ties to known terrorist organizations like Syria’s al-Qaeda branch Al-Nusra Front, significantly less attention has been focused on how the group was created, particularly on the man who founded them – James Le Mesurier, a British private security specialist, and former British mi

Le Mesurier’s role in founding the White Helmets and propagating its mythology to a Western audience was exposed in 2015 thanks to the work of independent journalist Vanessa Beeley.

Beeley, who spoke to MintPress News at length for this report, notes that it was Le Mesurier’s “‘realization that humanitarian aid was more effective at maintaining war than an army” that spurred his creation of the organization in order “to maintain public support for another costly war in a country that is, in reality, posing little to no threat to mainland America” or its allies.

Though mainstream narratives have suggested that the White Helmets were trained by the Red Cross, the White Helmets were actually founded in March 2013 by Le Mesurier. He, like many officers in the British military, attended the Royal Military Academy, where he graduated at the top of his class, receiving the Queen’s Medal.

He later served in the British Army and operated in a variety of theaters. Most notably, Le Mesurier served as intelligence coordinator for Pristina City in Kosovo soon after the NATO intervention that led to NATO being accused of war crimes for its targeting of thousands of civilians and media.

Having served the governments of the UK, US, UN and Gulf States, James Le Mesurier was able to very quickly garner financial support from fervent supporters of Syrian regime change.

By 2000, Le Mesurier left the army and went to work for the United Nations as he had “realized humanitarian aid was more effective” than an army in theaters of war during his time with the British military. He, again, served in a variety of locations, focusing on “delivering stabilization activities through security sector and democratization programs.” According to Le Mesurier, “stabilization activities” refers to the “framework for engagement in ‘fragile’ states” or, in other words, destabilized nations.

Prior to his founding of the White Helmets, Le Mesurier served as Vice President for Special Projects at the Olive Group, a private mercenary organization that has since merged with Blackwater-Academi into what is now known as Constellis Holdings. Then, in 2008, Le Mesurier left the Olive Group after he was appointed to the position of Principal at Good Harbor Consulting, chaired by Richard A. Clarke – a veteran of the U.S. national security establishment and the counter-terrorism “czar” under the Bush and Clinton administrations.

After joining Good Harbor, Le Mesurier became based in Abu Dhabi, where he specialized in risk management, emergency planning, and critical infrastructure protection. He trained a UAE gas field protection force and “ensured the safety” of the 2010 Gulf Cup in Yemen, a regional soccer tournament. But following this work, Le Mesurier claims to have become dissatisfied, wanting to have a more direct impact on the communities he worked in.

He told Men’s Journal in 2014 that it was the idea of using his military training to benefit civilians that truly enthused him: “the idea of being a civilian carrying a weapon and guiding a convoy in a conflict zone — that leaves me cold.”

When it came to time to found the White Helmets in March 2013, Le Mesurier seemed to have simply been in the right place at the right time. According to his own account, he founded the group in Turkey after being “compelled” by Syrians’ wartime stories.

Despite  founding the White Helmets in Turkey, he raised $300,000 in seed funding provided by the UK, the U.S. and Japan, which Le Mesurier apparently had no trouble scrounging up. The $123 million dollars that was funneled soon after to the organization by the U.S. and UK governments, along with Western NGOs and Qatar, dispels all notion of the organization’s alleged “impartiality” and “non-partisan” stance on the Syrian conflict stated on their website.

He then used it to train 25 “vetted” Syrians “to deal with the chaos erupting around them.” By September of that year, more than 700 “vetted” individuals were believed to have undergone training under Le Mesurier’s supervision.

However, Le Mesurier’s ties to British military intelligence, mercenary groups and involvement in “stabilization activities” and “democratization programs” suggest that his convenient appearance in Istanbul, Turkey is perhaps not too coincidental. As Beeley noted in an interview with MintPress: “there are very few coincidences in the multi-spectrum, hybrid war that has been waged against Syria by the U.S. coalition since 2011.”

Indeed, the White Helmets were founded when the West was losing on both the propaganda and military front regarding the push for regime change and foreign intervention in Syria. More specifically, as Beeley told MintPress, the group’s founding took place just after “the Syrian government had raised concerns about a terrorist chemical weapon attack in Khan Al Asal against the SAA [Syrian Arab Army].”

It should come as no surprise then that, since their founding, the White Helmets have been instrumental in blaming the Syrian government for any and all subsequent chemical weapons attacks in Syria, acting as both witnesses and responders to events that were later proven to be the work of the armed opposition in Syria or staged. As a result, Beeley argued that it’s well within reason to speculate that the White Helmets were explicitly founded with this purpose in mind.

However, it is Le Mesurier himself who shed light on why the White Helmets were formed at such a crucial point for the foreign-funded opposition. As Le Mesurier noted in a speech delivered on June 2015, in “fragile” (i.e. destabilized) states, security actors – such as mercenaries or foreign armies – have the lowest level of public trust. However, Le Mesurier states that in contrast, those professions with the highest level of public trust in such situations are firefighters, paramedics, rescue workers and other similar types of first responders.

Le Mesurier, however, is not the only figure linked to the British military to take such a perspective. UK Admiral Sir Philip Jones, Chief of Naval Staff, stated last year that “the hard punch of military power is often delivered inside the kid glove of humanitarian relief.” It is for this reason that military actions sponsored by the United States and its allies for the past few decades have often been framed as “humanitarian interventions.”

Thus, the White Helmets were seen as a chance to reclaim the trust that the Syrian opposition fighters had lost, as news of their affiliation with terrorist groups began to spread.

In reclaiming that trust in Western audiences, the White Helmets have done nothing to ease the burden of war in Syria, but have fomented it by underpinning the very propaganda that has kept the conflict raging on for over six years, as well as undermined the ability of the Syrian and Russian governments to secure diplomatic alternatives to continued fighting.

Indeed, despite their claim of “impartiality,” the White Helmets were instrumental in Western attempts to bolster international support for Western intervention and a “no-fly zone” in Syria. However, such intervention will bring much more devastation to Syria, something the White Helmets profess to want to end.

For instance, Dr. Leif Elinder, a Swedish pediatrician, told the Indicter that “after examination of the video material [of the White Helmets], I found that the measures inflicted upon those children, some of them lifeless, are bizarre, non-medical, non-lifesaving, and even counterproductive in terms of life-saving purposes of children.”

Other medical doctors have stated that other procedures conducted by the White Helmets as seen in the previously mentioned Netflix documentary were performed so poorly they would have killed the children, who were already deceased when the footage was taken.

In addition, first responder groups have also found flaws with the White Helmet’s trained rescues. Questions have been raised such as: how did the White Helmets know the bodies would be exactly where they found them?; Why are no attacks heard or seen in White Helmet videos – only the “aftermath”?; and why have the White Helmets chosen to “recycle” footage of the people they are allegedly helping? 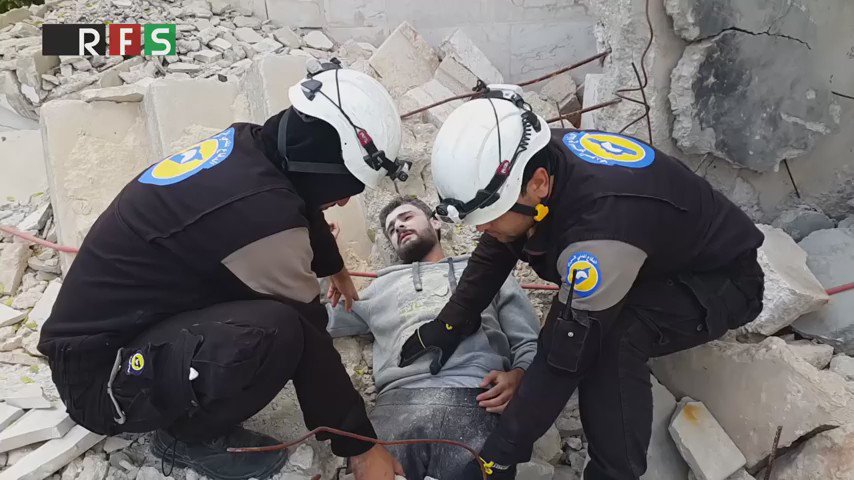 Thus,  if the White Helmets were not actually trained in first aid – as the above suggests – what did Le Mesurier and his team actually train them to do?

According to Beeley, Le Mesurier trained the White Helmets as a military group, as they have been found “working side by side with the Nusra Front and other extremist groups such as Nour Al Din Zinki in East Aleppo, where their ‘humanitarian’ centers were invariably alongside Nusra Front or even in the same building.”

Noting the White Helmet’s lack of paramedic expertise and the numerous photographs showing them carrying weapons, she added that this “confirms that their role has been as military and logistical support for their Nusra Front colleagues.”

However, the training received by the White Helmets likely did not stop there.

Beeley strongly believes that they were given extensive training in the production of propaganda – specifically, trained in camerawork and video production in order to produce videos for the media. She noted that “the sheer number of cameras on site at any one of their rescue productions demonstrates that they are well versed in publicity craft.”

Furthermore, Beeley suggested that the White Helmet’s footage used in their documentary also proves this point:

“The Oscar-winning Netflix documentary that recorded their exploits was based entirely on footage taken by the White Helmets themselves and supplied to the producers of the movie who did not leave Turkey and were therefore unable to verify the authenticity of the footage. The quality of video supplied suggests that the White Helmets were using sophisticated equipment and had been well trained in its use.

Thus, this training has enabled the White Helmets to accomplish two major goals for the governments and organizations that have orchestrated its rise to prominence.

First, as Beeley pointed out, it has facilitated “further proxy military intervention and to incite pseudo-humanitarian outrage from the International community and western public.”

Second, it has allowed the atrocities of the extremist factions that work with the White Helmets to be camouflaged by the “humanitarianism” of the group, which has been instrumental in allowing foreign governments to continue arming and funding these extremist, terrorist organizations with complete impunity.

Le Mesurier, for his part, has apparently become tired of the limelight – perhaps as a result of the thorough debunking of the terrorist-linked organization he fostered. Though still listed as an employee of Good Harbor, Le Mesurier has removed himself from the site of MayDay Rescue, a White Helmets-linked organization he founded, and all mention of him has been erased from the White Helmets website.